Jeanne Cooper, grande dame of CBS’ “The Young and the Restless,” is reportedly in critical condition at a Los Angeles hospital. The 84-year-old star is suffering from an unknown ailment and said to be in the hospital’s ICU.

On Friday evening, Cooper’s son — actor/director Corbin Bernsen of “LA Law” fame — asked his Facebook followers for “some prayers for my mom. Pretty rough. Won’t elaborate now, but I believe there’s still more purpose for her on this journey, but that’s not my call. I love her so much. I want peace for her. I hope this is okay to share with all of you who know and love her.” Saturday, he marveled at his mother’s spirit and ability to fight back. “Suffice to say, the greatest boxers of all time aren’t half the fighter she is.”

Cooper has been beloved on daytime’s number one show since she joined the cast in November 1973 — about seven months after the soap debuted — as the wily and no-nonsense, not to mention fabulously-wealthy, Katherine Chancellor. The enduring star is known for her feisty sense of humor, her take-no-prisoners attitude and being one of the show’s most popular actresses — on the set or off.

Angelica McDaniel, head of CBS Daytime, tweeted Saturday, “Our thoughts, prayers and love are with Jeanne Cooper and her family as she rests and recovers.”

Kern County-born Wilma Jeanne Cooper began her acting career in the 1950s when she appeared on a slew of episodic primetime shows — usually cast as the tough-talking broad or elegant socialite on shows ranging from “Perry Mason,” to “Daniel Boone” to “The Untouchables.”  She also appeared in many film westerns.

But it is on daytime where she made her true mark. Cooper touched the audience in many plot lines that blurred her real life with her reel-life. She underwent a facelift in 1984 and asked the producers if they would write it in. Kay’s many public bouts with alcoholism also mirrored Cooper’s. Alcoholism was a subject she also never shied away from and she opened up about her own battles long before it was de rigueur in Hollywood. On occasion, Cooper was even as evocative as Katherine off-screen. In her 2012 memoir, “Not Young, Still Restless” she revealed she had had an affair with Beau Kayzer, the actor who played her son on “Y&R.” The actor is 21 years her junior.

She married TV producer Harry Bernsen in 1954 and divorced in 1977. The couple had three children, all actors Corbin, Collin and Caren.

Cooper had to take a medical leave from the show in 2011 when she had a horrible bout with the flu. Katherine was played briefly by Michael Learned of “The Waltons.”

Cooper received Daytime’s Lifetime Achievement Award in 2004. Four years later, she won as Lead Actress for the first time. Accepting the prize she quipped, “Oh, dear. High definition or not high definition. I tell ya, it’s a bitch, isn’t it!?”

Cooper also received a star on the Hollywood Walk of Fame in 1993.

Prestige sending prayers for her a speedy recovery. 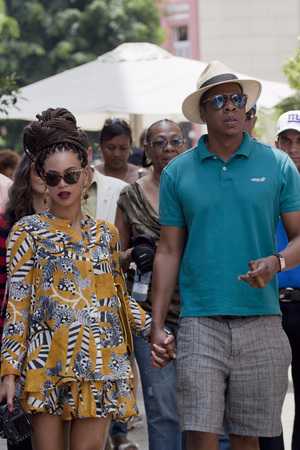 First it was Beyonce release of " Bow Down" and now Jay-Z  "Open Letter"...hmmm Seem like this couple is displaying a power...