U.K. Prime Minister Boris Johnson announced his resignation Thursday, after dozens of ministers quit his cabinet and urged him to go.

In a statement delivered outside his office at no. 10 Downing Street in London, Johnson said he has agreed to resign as leader of the ruling Conservative Party, which would result in his departure as prime minister once the party selects a successor through a leadership election, possibly in the fall. He said that process “should begin now” and the timetable will be announced next week. He also noted that he has appointed a new cabinet of ministers who, along with him, will serve “until a new leader is in place.”

“It is clearly now the will of the parliamentary Conservative Party that there should be a new leader of that party and therefore a new prime minister,” Johnson said.

“I want you to know how sad I am to be giving up the best job in the world,” he added. “But them’s the breaks.”

Keir Starmer, leader of the opposition Labour Party, released a statement earlier Thursday, saying: “It is good news for the country that Boris Johnson has resigned as Prime Minister. But it should have happened long ago.” 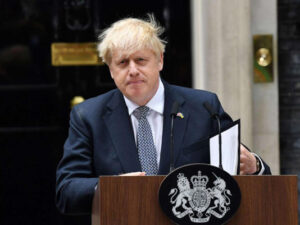 The embattled, 58-year-old British premier had initially vowed to cling on to power, quickly appointing two replacements for U.K. Chancellor of the Exchequer Rishi Sunak and U.K. Health Secretary Sajid Javid after they announced their resignations on Tuesday. But dozens more departures — a growing mutiny among his cabinet — ultimately made Johnson’s position untenable, with some lawmakers in his own Conservative Party even suggesting that the rules would have to be changed in order to remove him from office.

It was unclear Thursday whether Johnson’s party would force him out before a successor is appointed, amid fears that he could remain in office until the fall. If they do not, the opposition has threatened to push for a parliamentary vote of no confidence to oust him.

Controversy has long followed Johnson since he became prime minister of the United Kingdom in 2019. In recent months, he faced immense criticism over the number of illegal gatherings held at government offices and residences while the country was under a strict pandemic-related lockdown in 2020 — a scandal the British media quickly dubbed “Partygate.”

Johnson himself was issued a fine by London’s Metropolitan Police Service for attending a birthday party held in his honor at no. 10 Downing Street, when indoor mixing was barred to stem the spread of COVID-19 — making him the first prime minister in U.K. history to have been found guilty of breaking the law while in office. He then survived a vote of confidence brought forward by disgruntled lawmakers in his party, which left him wounded politically but still in charge. Surviving the vote meant he was immune from facing a similar challenge for at least a year. But it was a very different crisis which ultimately forced Johnson’s resignation on Thursday — one that concerned the personal conduct of a minister in his cabinet, one of his appointees, Conservative lawmaker Chris Pincher.

Last week, Pincher offered his resignation from the Conservative whips’ office, after he was accused of drunkenness and sexual misconduct while at a bar in the presence of colleagues. Then reports emerged in the British media that Pincher had previously faced complaints, which were upheld, about similar conduct; but Downing Street denied that Johnson was aware of such complaints.

This, however, turned out to be false, as further information later revealed that Johnson had been briefed about Pincher’s conduct prior to rehiring him in 2019.

In a raucous session of the U.K. House of Commons on Wednesday, Johnson defended his record in government as he faced mounting pressure to step down.

“He knew the accused minister had previously committed predatory behavior, but he promoted him to a position of power anyway,” Starmer, who has repeatedly called for Johnson’s resignation, told lawmakers Wednesday. In response, Johnson defended his handling of Pincher’s conduct, which he said was now being investigated, and said he “abhorred” bullying and “abuses of power.”

“I greatly regret that [Pincher] continued in office and I have said that before,” Johnson told lawmakers.

Referring to the number of resignations from Johnson’s administration, Starmer said the U.K. government was facing a case of the “sinking ship leaving the rat.”

As Johnson pledged to stay on, a group of senior cabinet ministers told him this week that he should go. More resignations at all levels of government followed and Johnson ultimately caved to the pressure before he was to be forced out by his own party.

“The reason I have fought so hard in the last few days to continue to deliver that mandate in person was not just because I wanted to do so, but because I felt it was my job, my duty, my obligation to you to continue to do what we promised in 2019,” he said Thursday. “And of course, I’m immensely proud of the achievements of this government.” As one of the chief proponents of Britain’s historic exit from the European Union, or “Brexit,” and then as prime minister at the helm of the country’s coronavirus crisis, Johnson will go down in history as one of the most divisive leaders the U.K. has ever had.

Johnson burst onto the political scene when he was elected to be the mayor of London in 2008, winning two elections and overseeing the response to the London riots of 2011, as well as hosting the 2012 Summer Olympics. He had previously served as a member of Parliament from 2001.

Johnson’s trademark tousled blond hair, sense of humor and carefully crafted bumbling persona made him an instantly recognizable public figure at home and abroad. Embarrassing situations that would have humiliated some politicians — such as being stuck on a zipline while waving a Union Jack flag near Olympic Park in east London — Johnson embraced.

But with that came caveats, particularly during the most crucial phase of his political career when he led the U.K. out of the European Union.

Under the prime ministership of Theresa May, it seemed as if the U.K. might not be leaving the trading bloc at all. But after Johnson replaced her in the summer of 2019 and a chaotic first few months in office, he won a resounding general election victory that ensured Brexit. Using clear, simple messaging, Johnson spearheaded a number of successful election campaigns. As a member of Parliament at the time of the 2016 Brexit referendum vote, he deployed the phrase “Take Back Control” to decisive effect, garnering 52% of the vote. He went on to become foreign secretary later that year, a position he held until the summer of 2018. In his general election campaign of 2019, the slogan “Get Brexit Done” again saw him win a decisive vote, seemingly against the odds, as his campaigning style and character seemed to connect with ordinary people in a way that bamboozled rival politicians.

However, his time as prime minister proved tumultuous. Johnson was criticized for not taking the COVID-19 pandemic seriously enough in March 2020, and ultimately contracted the virus himself and was hospitalized in intensive care for several days. Observers have long seen Johnson as a “populist,” with comparisons repeatedly drawn between him and former U.S. President Donald Trump. Opposition lawmakers have regularly accused Johnson’s government of having “one rule for them, one rule for everyone else.”

Just weeks after taking office, Johnson asked Britain’s Queen Elizabeth II to suspend Parliament — a move that observers said was designed to thwart opposition lawmakers from blocking Brexit in the lead up to the Oct. 31 deadline, prompting protests across the U.K. The queen approved Johnson’s request for prorogation, but the U.K. Supreme Court unanimously ruled in a historic judgement a month later that Johnson’s advice was “unlawful.” Then there was the controversy over government-paid refurbishments at Downing Street in 2021, which became known in the British media as “Wallpapergate.” U.K. prime ministers are given an annual allowance of up to £30,000 ($41,000) a year to renovate the official residence. But Johnson was accused of potentially using Conservative Party funds to top that up and pay for a more lavish redecoration of his apartment at no. 11 Downing Street, where he lived with his fiancée, Carrie Symonds, and their two young children.

Johnson’s colorful political life was matched by a controversial private one. Johnson regularly refused to answer questions about how many children he had when asked by journalists on a number of occasions. It was Johnson’s evasiveness on such topics and what many saw as his flexible relationship with the truth that made him such a controversial figure with the public — and ultimately lead to his downfall.

It was an ignominious end to a premiership plagued by controversy and scandal. Johnson will likely remain in office until a new leader from within the Conservative Party, which still holds a sizeable majority in U.K. Parliament, is elected. Whoever is chosen will become the fourth prime minister the country has had in six years, since the U.K. voted to leave the E.U. in 2016. 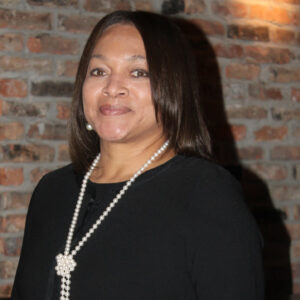 Oklahoma authorities are investigating the deaths of a Black Wall Street Chamber of Commerce president and her husband after...