Tyrese Gibson is once again blasting Dwayne “The Rock” Johnson in their ongoing feud surrounding the Fast and Furious movies.

The actor and singer took to his Instagram Wednesday to announce that he won’t be appearing in the next movie in the franchise if Johnson is also taking part.

“Hello world, hello loyal fans and loved ones from OUR fast universe,” Gibson started the post. “I’m sorry to announce that if [Dwayne] is in Fast9 there will no more Roman [Pearce]. You mess with family and my daughter’s survival I mess with yours.”

Gibson is currently embroiled in a legal battle with his ex-wife, who accused him of abusing their daughter in court documents.

The post comes after Gibson blasted Johnson when it was announced the ninth installment of the series was being pushed back a year in order to release a standalone film for the former wrestler’s character.

“Congratulations to @TheRock and your brother in law aka 7 bucks producing partner @hhgarcia41 for making the fast and the furious franchise about YOU,” the actor wrote, also taking a dig at Johnson’s last movie Baywatch, which underperformed this summer at the U.S. box office.

Gibson has expressed his displeasure with the actor in the past as rumors of the standalone began swirling. He took to commenting on Johnson’s Instagram pictures in an attempt to convince the actor not to “fly solo.”

The drama between actors in the franchise first erupted on the set of Fast 8 when Johnson called out some of his male costars as “chicken s—” and “candy-*ss.” Gibson took to Instagram in defense of franchise star and producer Vin Diesel at the time – who is reportedly the target of his costar’s rant. 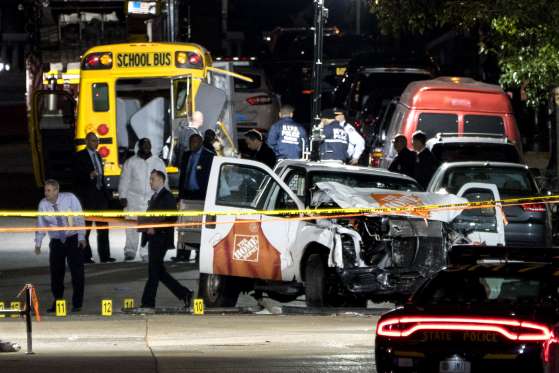 A driver plowed a pickup truck down a crowded bike path along the Hudson River in Manhattan on Tuesday, killing eight people...