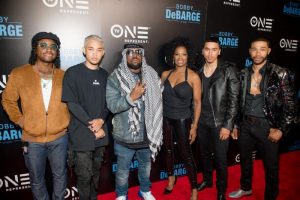 Bobby DeBarge Jr. and cast member Adrian Marcel surprised the audience with a special impromptu performance, one of the many evening highlights. Following the screening, Hip Hollywood’s producer and correspondent Vanessa Barnett moderated the Q&A with cast members and creative team revealing special behind-the-scene moments from the film. The evening concluded with an exclusive VIP reception complete with hors d’oeuvres and cocktails.

Continuing the network’s tradition of highlighting inspirational music figures, THE BOBBY DEBARGE STORY explores the tumultuous life of the former lead singer of the 70’s R&B/Funk Band Switch, also the eldest sibling of the world-famous pop group DeBarge. Despite his success in music, the iconic falsetto found his life in peril as he struggled with fame and fortune while coping with the memories of his dysfunctional childhood.

THE BOBBY DEBARGE STORY is produced for TV One by Swirl Films. Leading the production are Executive Producers, Eric Tomosunas and Teri DeBarge. The film is written by Norman Vance, Jr., directed by Russ Parr with casting provided by Leah Daniels Butler (Leah Daniels Butler Casting) and George Pierre (Pierre Casting). For TV One, Karen Peterkin and Jason Ryan are the Executive Producers in Charge of Production, Donyell Kennedy-McCullough is Senior Director of Talent & Casting and Robyn Greene Arrington is Vice President Original Programming and Production. THE BOBBY DEBARGE STORY premieres Saturday, June 29 at 8 pm EST/7C on TV One. Follow the conversation online @tvonetv using the hashtag #THEBOBBYDEBARGESTORY.

For more information about TV One’s upcoming programming, including original movies, visit the network’s companion website at www.tvone.tv. TV One viewers can also join the conversation by connecting via social media on Twitter, Instagram and Facebook (@tvonetv) using the hashtags #BOBBYDEBARGESTORY and #REPRESENT. Download the TV ONE App to watch your favorite shows and movies.

Cardi B entered her plea on all the new charges in the strip club beatdown case. Fresh off her Album of the Year win at the BET Awards...