The person behind a plot to harm and possibly kill Barack Obama was identified, authorities said, when tiny cat hairs found on an explosive package were matched to cats owned by a 46-year-old Texas woman.

Legal documents United States of America vs Julia Poff  was filed in a Houston court this week detail the case against Julia Poff, who is accused of mailing homemade packages to the then president and to the Texas governor, Greg Abbott, in October 2016.

Neither device detonated and the package intended for Obama was intercepted by the secret service. The court papers say, however, that Abbott may only have escaped “severe burns and death” because “he did not open [the package] as intended”.

Poff, who is also alleged to have sent a third package to the commissioner of the Social Security Administration, was charged with six counts, including mailing injurious articles and transporting explosives with the intent to kill and injure.

She is also charged with more than $5,000 of food stamp fraud and false bankruptcy declaration.

According to the court documents, FBI investigators traced the packages to Poff through their components, which included a box of Pall Mall cigarettes purchased at a Flying J Truck Stop near her home in Brookshire, Texas, 30 miles west of Houston.

Evidence also included the top of a bottle of salad dressing of a brand Poff was known to have bought for an “anniversary dinner” and a damaged shipping label Poff had originally had received through a purchase on eBay.

The indictment also revealed that fireworks were found in Poff’s garage. Among the government’s central pieces of evidence, however, were the hairs from her pets. “Cat hair was found under the address label,” the indictment states. “The cat hair on the Obama package was microscopically consistent with the hair of one of Poff’s cats.”

Investigators say the defendant “stated that she did not like the president” and was “upset with Greg Abbott” because “she had not received support from her ex-husband”.

The Houston Chronicle reported that Poff claimed in October “trash had been taken from her family’s home that ‘had our fingerprints on it’ and was ‘used in some serious crimes that we did not commit and know nothing about’”.

The government is seeking Poff’s continued detention ahead of trial, alleging a “high risk” that she will attempt to interfere with witnesses if released on bail.

President Trump signals welfare reform is next, with details to come 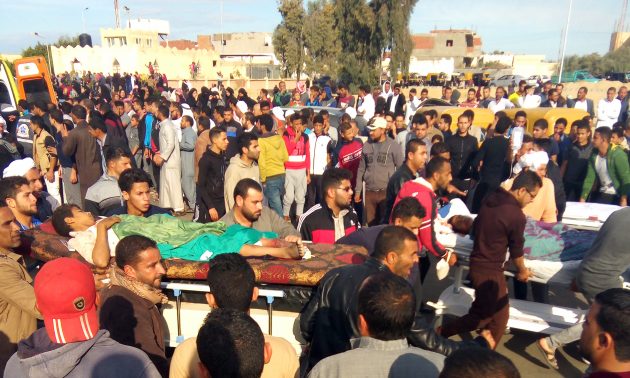 Militants killed more than 300 people at a mosque in North Sinai on Friday, detonating a bomb and gunning down worshippers...