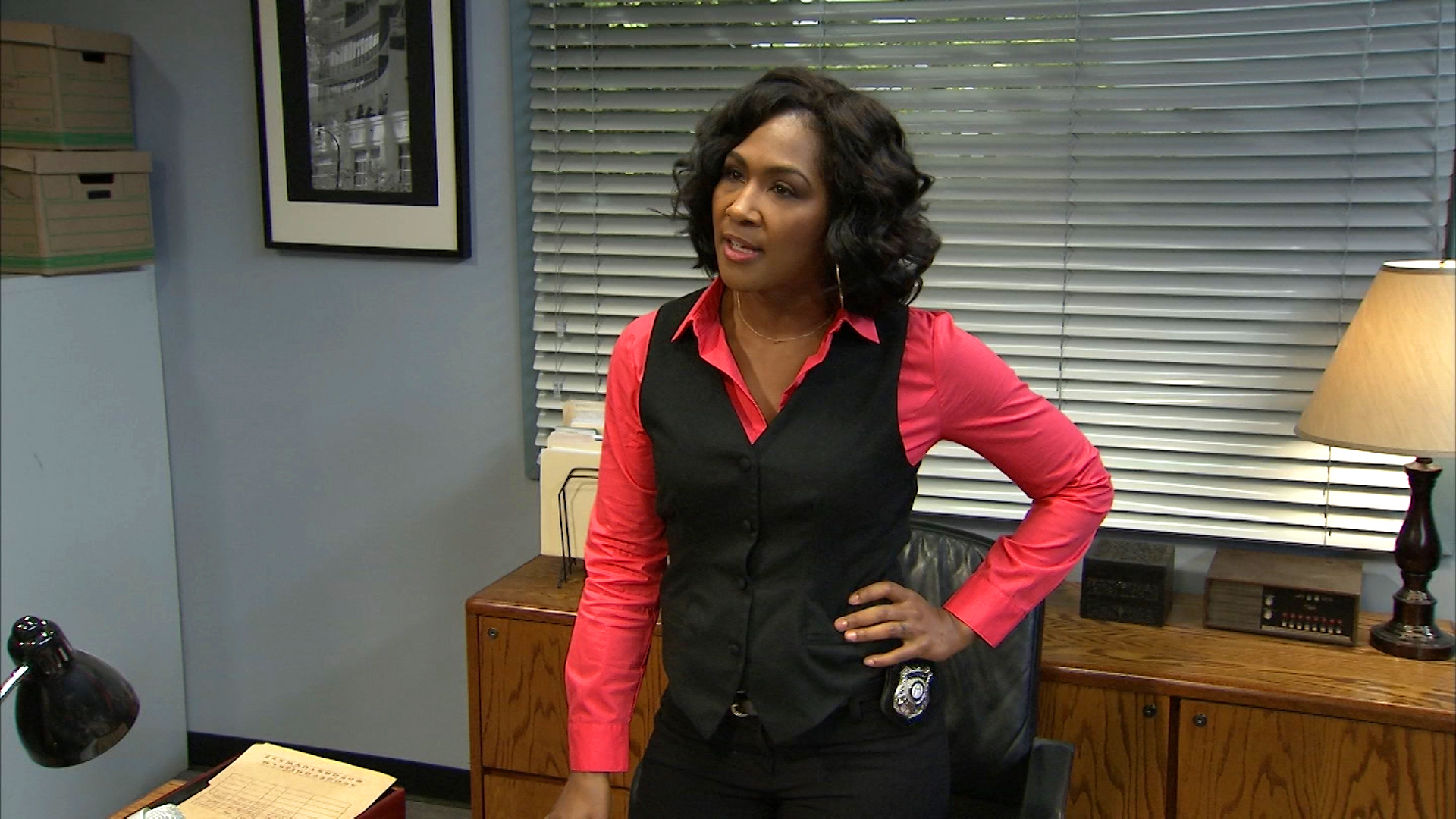 Terri J. Vaughn directs and stars in the upcoming episode of Mann & Wife, world premiering on Tuesday, May 16 at 9pm ET on Bounce. Real-life husband and wife team David and Tamela Mann star and serve as executive producers of Mann & Wife. The half-hour situation comedy follows their characters – newlyweds and second-chance sweethearts Daniel and Toni Mann – as they laugh and love their way through the ups and downs of life as a blended family, each with two children from previous marriages. Tune in to Man & Wife on Tuesday May 16 at 9pm EST and read below our interview with Terri J Vaughn.

Sylvia: We know that you’ have superb acting skills, and now you’ve become a vital part of the acclaimed T.V series Mann & Wife. Can you please tell us about the selection process, your reaction to being chosen for the role, and what  attracted you  to the role?

Terri: Well, like you said, this is a genre I’ve been doing for most of my career. Comedy. Sit-com. Comedies. And when Roger Bobb from BobbCat films called me, and told me about the part, and asked me if I would be interested in it, right away I knew that I wanted to. First of all, it’s with a cast of people that I adore, personally and admire professionally. Tony Rock, David Mann, Pamela Mann: I’ve worked with all of them before. They’re all hilarious. I love them all dearly. So that was already a plus from me. And then when he told me about the role, that you know she was a boss and the lieutenant of David Mann and Tony Rock, I was like, “Absolutely! Yes!”. Because I know that scenario right there already sets up for so much comedy, so I knew we would have a lot of fun and I liked to go to work and play with them all day long anyway.

Sylvia: Terri can you tell us a little bit more about your character and how, if any at all, she compares to you in your everyday life?

Terri: Well I mean, of course, you know every role you find yourself in them or find them within you. She’s a boss. She is a police lieutenant. She has a romantic back history with Tony Rock’s character. She’s fun. She’s very career-driven. You know she suffers in her personal life, as far as her love life, because she chooses to climb the ladder in a career that is such a man-driven career being in the police force. So all those things are great to me. Those are the kinds of characters I would love to play. And as well she gets to be funny.

Sylvia: Yeah, very funny. And not only are you an actress in Mann & Wife, but you’re also directing the upcoming episodes; so how does that feel to be both behind the scenes and in front of the camera making sure that this episode is going to come to life?

Terri: It feels awesome and incredible. You know in the moment it was nerve wracking. I was nervous as heck. I was, you know, scared and that’s all good stuff to me. That means I’m doing what I’m supposed to be doing. You know I love the challenges. I love to grow and stretch myself, so this was like right up my alley and this was definitely the next step for me. It felt genuine, and it just felt like it was time. It was time for me to do that. And I’ve been preparing to do that for a while, I’ve been shadowing Roger for the past couple of years on different shows. And you know, last year I directed my first feature film, and this year I’m getting to direct another film, which we’ve already started pre-production. So it was a natural change for me. Shift. 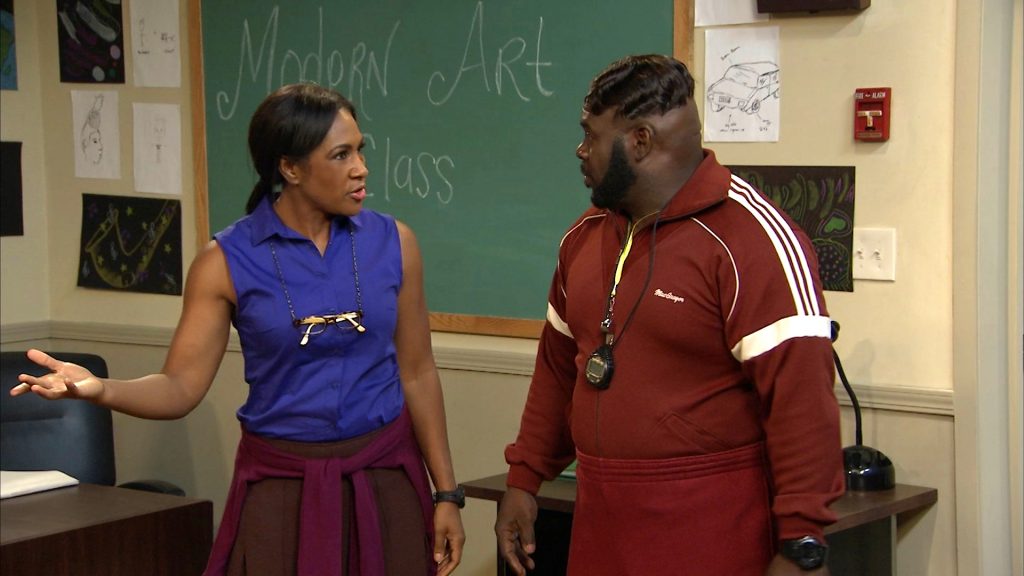 Sylvia: How would you describe your experience working with and for Bounce?

Terri: It’s been amazing! You know the execs are very, very supportive. The fact that they said yes to me being able to direct an episode was really huge for me. For them to you know take a chance on me to trust me to even direct an episode for one of their hit shows– You know this is, I believe, the third season, and for them to allow me the opportunity to come and direct one of their hit shows, that does a lot for me. And you know the fact that this is a company that is catering to the black community, to our voice, just seeing us, our people on T.V in all kind of aspects: being funny, being serious. I think it’s so important. It’s important for families to turn on their T.V’s and see people that look like them, especially for young people. I think that you know the power of television is huge because we are in the homes of people and their families week after week, and we become a part of that family.

Sylvia: If you could pass on one spiritual insight, words of wisdom, or message to your children, as far as your career is concerned? What would that be?

Terri: Well you know I really believe and I felt this when I had my first child– and I have three, that God really gives you– He gives you the kids that fits you, because all that guilt and stuff that I was feeling that was all on me. My babies never made me feel guilty, like they’ve always just rolled with the punches, and was like– It was like, “Yay! Whoo!” They were fine. They’re cool. And I used to put all this guilt on myself thinking that I needed to be more, but they were perfectly fine because God gives you what you need, and they are the kids that I need. These are the kids that fit my life and who I am. That’s one thing.

Sylvia: If you had some encouraging words for those that are planning or trying to walk in your footsteps or give them some advice? What would be that as far as them trying to become an accomplished actress, or director, or just being like Terri J. Vaughn?

Terri: Again, it goes back to my mantra: She believed that she could so she did. There’s nothing else to do. Just do it. Believe it and do it.