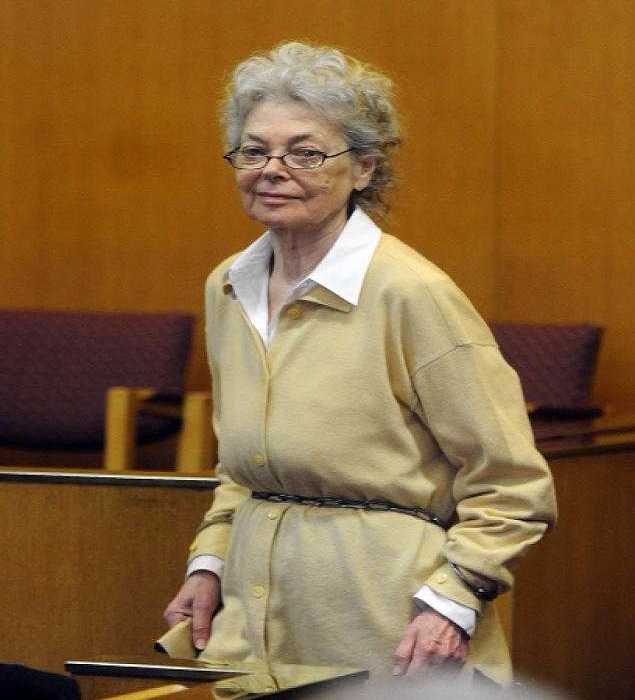 PONTIAC, Mich. — A suburban Detroit grandmother was convicted Tuesday of second-degree murder for killing her teenage grandson last spring, as jurors rejected her claim that she shot him six times in self-defense.

Sandra Layne, 75, cried quietly when she heard the verdict, which was delivered during the first full day of jury deliberations. She was also convicted of using a firearm during a felony and likely faces at least 14 years in prison.

Defense attorney Jerome Sabbota said after the hearing that Layne was “devastated” by the verdict. But Jonathan Hoffman’s mother, Jennifer Hoffman, said her mother was a “monster” who deserves to go to prison.

“I’m glad she’s put away and can’t do harm to anyone else,” Jennifer Hoffman said outside court. “He was a great kid and didn’t deserve this.”

As Layne was being led out of court, some family members sitting with her 87-year-old husband waved in a show of support, but her view was blocked by a deputy.

Layne fired 10 shots at her 17-year-old grandson, striking him six times over a six-minute span during an argument at their West Bloomfield Township home last May. She never disputed that she killed her grandson, but she testified that she did so because he had hit her and she feared for her safety.

The Oakland County jury had a choice of first-degree murder or lesser charges, or it could have acquitted her based on her argument of self-defense.

The evidence included a recording of Hoffman’s desperate call to 911 in which he pleads for help, even as more shots are fired.

“My grandma shot me. I’m going to die. Help. I got shot again,” he told the dispatcher as he gasped for air.

“They said they played it over and over and over again” in the jury room, Walton said. “One of the big things they said is when you hear the shots on the (call) there’s no struggle.”

In his closing argument, Walton told jurors that Layne never rushed out of the West Bloomfield Township home, despite claiming to be afraid of her grandson, and never called for an ambulance to help him after the shooting. She said she shot him after Hoffman struck her during a heated argument about money and a plan to flee Michigan because of a failed drug test.

“I wanted him to pay attention to me. He had to listen. It wasn’t a conversation. It was arguing. Swearing,” Layne said in tearful testimony last week, explaining why she pulled out a gun.

But Walton pointed out that Layne never complained to police about being attacked. A hospital nurse who examined her after her arrest said Layne had no injuries and spoke lovingly about Hoffman.

Sabbota asked jurors to view the incident through the eyes of a woman in her 70s. He said Layne was taking care of a teen who had used drugs and brought strangers to the home. Hoffman’s parents were living in Arizona during his senior year of high school. They had their hands full with a daughter being treated for a brain tumor.

“Her adrenalin is pumping. You’re not calm,” Sabbota said in his closing remarks. “Boom, boom, boom – you pull the trigger.”