Glee’s arrest report, alleges that the 49-year-old spoke to police after waiving his right to remain silent. He is charged with two counts of murder and kidnapping and one count of sexual assault.

According to the report, Glee allegedly confessed to the crimes on multiple occasions and provided detail about them to police in both Tallahassee, where the crimes occurred on separate days, and Orlando, where he was eventually apprehended by officers.

Police say Glee claimed to have first met Salau — a student and protester, active in the Black Lives Matter movement — on June 6, hours after she said she was sexually assaulted by a different man. The two met at a bus stop in Tallahassee, and he claims she confided in him about the sexual assault, which she described in a series of Twitter posts.

Salau allegedly told Glee she had no place to stay, and he offered to take her back to his home, where she could bathe and sleep.

According to police, Glee called Sims, who he knew from volunteer work and who, he said, would occasionally give him rides and bring him meals. Sims picked them both up in her white Toyota sedan, and drove them to Glee’s home, where she dropped them off. The report indicates video footage from the bus station confirms Glee’s version of events.

Soon after they arrived at his home, Glee told investigators Salau took a shower. Afterwards, according to the report, he tried to have sex with her, but she refused and resisted, fighting him off.

“He stated that she physically resisted him, and that she bit him upon his right forearm during the struggle,” the report says.

Police allege that he then confessed to overpowering her and raping Salau before tying her up.

According to the report, Glee kept Salau imprisoned in his home for three to five days, untying her only for meals and to bathe. Police say he admitted to “sexually assaulting her numerous times during those three to five days.” Because he has a criminal record, Glee allegedly said he realized he’d likely end up in prison if he let Salau go free.

“Glee indicated that he determined that his only course of action was to end her life,” reads the report. He bound her with rope, in a manner he believed would obstruct her ability to breathe, and left her in a bedroom.  “Glee explained how over the course of several hours he would re-enter the bedroom multiple times to see if [Salau] was still alive,” the report says. “Ultimately, he entered into the bedroom and determined [she] was deceased.”

Glee allegedly confessed that after Salau died, he kidnapped Sims, binding her with rope as well. Investigators believe Glee ransacked her apartment before kidnapping her and fleeing in her car — which was found outside Glee’s home, stuck in the mud.

Salau was reported missing on June 6, while Sims vanished on June 11.  On June 13, Tallahassee police traced Sims’ cellphone to Glee’s home, where they found her beneath a bloody sheet in a bedroom. Salau’s body was found in the woods behind his home, covered with leaves.

Official causes of death have not been released in this case.

Authorities allege Glee fled to Orlando on a bus before Tallahassee officers arrived at his home.

The arrest report states Glee made his confession to officers at the time of his arrest as well as later on, after he was rushed to an Orlando hospital after complaining of breathing problems.

Police allege he “had made voluntary admissions to officers guarding him that he had murdered two women in Tallahassee,” reads the reports. “He would also place a telephone call to his mother and make these same admissions.”

Police allege all of these admissions, including those he made to his mother, were recorded by the officers’ body cameras.

Glee, who remains in custody without bond, has yet to enter pleas to the charges, and his attorney could not be reached for comment. 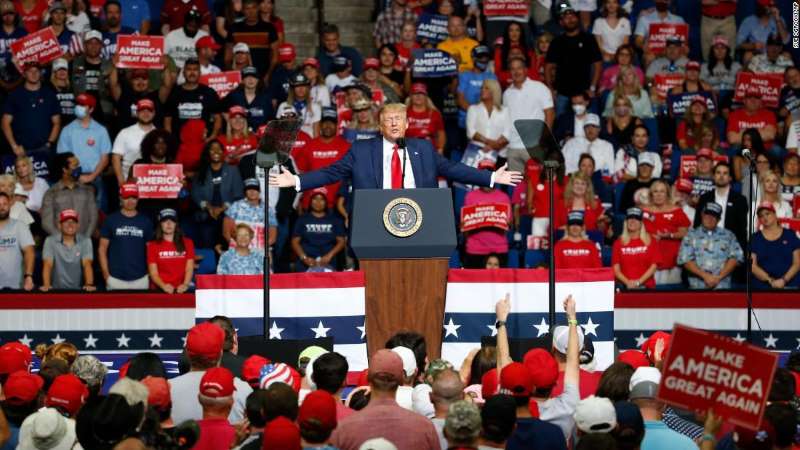 After another round of testing for campaign staff in Tulsa, two additional members of the advance team tested positive for the coronavirus....