The Broward County Sheriff’s Office received a call in November with an ominous warning: Nikolas Cruz, a troubled 19-year-old, was collecting guns and knives and “could be a school shooter in the making.”

It was one of at least four times local or federal authorities were contacted about such a threat linked to Cruz, including a tip the FBI received in January warning that he would “get into a school and just shoot the place up,” according to a transcript of the call obtained by The Post on Friday. Another tip to the sheriff’s office the previous year warned that Cruz “planned to shoot up the school.”

In the era of “see something, say something,” members of the public did just that. But what happened after the November call fit a disturbing pattern in the lead-up to the Parkland, Fla., massacre: No report was filed, and there is no evidence the threat was ever investigated.

Less than three months later, police say, Cruz walked into Marjory Stoneman Douglas High School and gunned down 17 students and faculty members. As the rampage has supercharged the country’s politically fraught debate over gun control and school safety, it also has cast a spotlight on the systems set up to protect Americans nationwide.

The FBI’s acting deputy director David Bowdich said this week that the agency made mistakes in its handling of a warning about Cruz. The FBI on Friday briefed congressional staff on the tip and the agency’s failure to properly follow up.

Investigations into mass shootings often reveal warning signs that seem blindingly clear with the benefit of hindsight. But the Parkland shooting has stood out for the sheer scale of how many alarms were raised before the Feb. 14 rampage.

Rather than flying under the radar, Cruz was a known troublemaker who repeatedly drew scrutiny from local, state and federal authorities as well as school officials, social services investigators and mental-health counselors. Yet time and time again, the alarms would go unheeded.

This account is based on interviews, police records, state documents, public statements and 911 recordings dealing with the shooting. Cruz is behind bars, charged with 17 counts of premeditated murder, and likely to face a possible death sentence.

Police say they never had cause to arrest Cruz, leaving him with a clean criminal record and able to pass background checks. Only five states have “red flag laws” allowing them to seize guns before people can commit acts of violence, and Florida is not among them.

“We take guns from people when we run into them engaged in aberrant, troubling behavior,” said Daniel J. Oates, the Miami Beach police chief who had the same role in Aurora, Colo., when a gunman killed 12 at a movie theater there in 2012. But under Florida law, he said, “there’s a strong presumption that the person is entitled to the gun back.”

Howard Finkelstein, the Broward County public defender representing Cruz, said he should have been involuntarily hospitalized under the state’s Baker Act.

“There is no explaining how every single agency in every regard missed every signal,” said Finkelstein. “It’s very overwhelming in its sadness and scariness. Because there are people in this county, and I imagine counties all over America, who want to know: Are my children safe?”

People who knew Cruz growing up said he would attack animals and pick fights, while educators repeatedly referred him to counseling. The Florida Department of Children and Families (DCF) investigated his home life in 2016 after receiving allegations he was being mistreated, but officials said his risk level was low because he lived with his mother, attended school and received counseling. The probe was closed.

In November, his mother died and he was removed from Stoneman Douglas earlier that year for disciplinary reasons. The same month he left Douglas, Cruz purchased the AR-15 he would use in the rampage, police said.

By the time of the shooting, Cruz had legally purchased at least 10 rifles and shotguns, including an AK-47 variant, according to a law enforcement official familiar with the investigation.

Law enforcement officials have drawn intense criticism for lapses involving Cruz. The FBI said it failed to investigate the January warning about concerns that he wanted to kill people, owned guns and could carry out a school shooting.

The caller, who seemed to have detailed knowledge of Cruz’s behavior, said Cruz had commented on social media about killing himself — something passed to local police, she said — and that his more recent posts suggested violence against others.

“Something is going to happen,” the caller said.

The FBI representative inquired about the caller’s assertion that Cruz was “into ISIS” and requested contact information for the people with whom Cruz is said to be staying.

That tip came months after the FBI was alerted to a YouTube comment in which someone with the screen name “nikolas cruz” wrote “Im going to be a professional school shooter.” The agency said it was unable to determine who posted the message at the time, but now believes it was Cruz.

The Broward County Sheriff’s Office said Thursday it received 23 calls relating to Cruz or his family dating back to 2008, when he was 9 years old.

In one 911 call to that sheriff’s office, a woman said that her son and another young man — Cruz, according to his lawyer who confirmed this call centered on his client — got into a fight, and she was “afraid he’s coming back and he has a lot of weapons.” She also said that Cruz had aimed a gun at people’s heads before. In another 911 call, Cruz called authorities and, sounding distressed, said he was attacked.

Information about that call was sent to Scot Peterson, the Douglas school resource officer who failed to enter the building during the shooting, but it was unclear what he did with the tip. Peterson has retired and the deputy has been placed on restricted administrative duty as part of the investigation.

In November, a caller alerted the Broward County Sheriff’s Office that Cruz was collecting guns and knives, wanted to join the Army, may commit suicide and could be a school shooter. Authorities have not identified the caller, except to say they called from Massachusetts.

Robert Bonczek, 17, a Stoneman Douglas senior who plans to join the Marine Corps, said students are angry with law enforcement officials and that civilians and authorities alike don’t take threats as seriously as they should.

“We’re desensitized to any threat,” he said. “So when they see something on the Internet they think, ‘eh, whatever.’ No one ever thinks it will happen to you.”

Bonczek said most students are focusing not on blame, but with channeling their anger to press for changes to laws regulating guns.

“The FBI didn’t do their job, but it’s hard to do anything about that,” he said. “But with Congress, we can specifically make calls for change.” 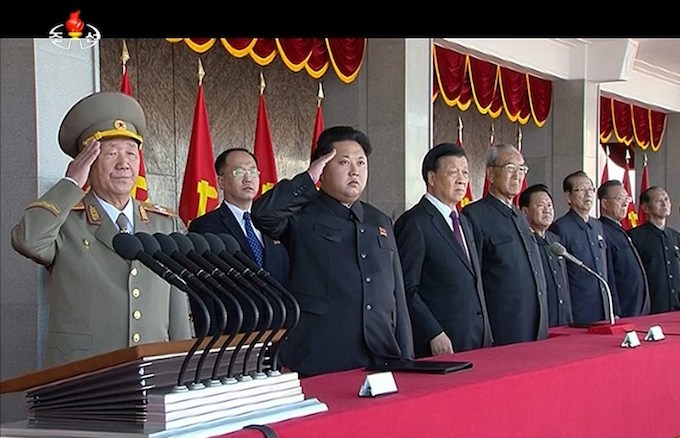 The United States said on Friday it was imposing its largest package of sanctions to pressure North Korea to give up its nuclear...