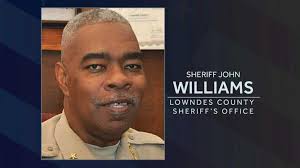 We are sadden to report that Lowndes County, Alabama is mourning the senseless murder of Sheriff “Big John” Williams.

Sheriff “Big John” towered over this rural central Alabama county in more ways than one. He was shot and killed in the line of duty Saturday night in the parking lot of the QV convenience store. The store is on the main drag of this small hamlet, across the town square from the courthouse and down the street from Williams’ home.

Williams’ towering height gave him his nickname. A beloved lawman serving in his home county, he was also well-respected by the state’s law enforcement community.

He had an easy smile and a deep voice that he hardly ever raised. He didn’t have to.

“He was the sheriff,” said Eddie Lee “Jackpot” Grant, another Lowndes County native. “If he could help you, he would. Every time he would see you, he’d wave and speak. You know that voice he had.”

Hayneville, the county seat, is about 25 miles west of Montgomery, in the heart of the Black Belt. The county has a population of about 11,000. Williams regularly rode through the town and out in the county in his unmarked Chevy Tahoe. He would squawk the siren as he went by.

“You see Big John, and he’d give you the whoop-whoop,” Grant said, smiling. “He’d never toot the horn, just the whoop-whoop. He let you know he was out doing his job. And now he’s gone.”

Details are sketchy as to what happened Saturday night. The Alabama Law Enforcement Agency is handling the investigation. ALEA labeled William Chase Johnson, 18, as a suspect in the shooting Saturday night. Williams was shot around 8:15 p.m. Johnson walked up to the crime scene just after midnight, firearm in hand, and gave himself up after a manhunt that went on for hours.

Charles Benson says he was a witness to the shooting of Lowndes County Sheriff John Williams.

ALEA hasn’t commented on whether Williams was in uniform or if he was driving a marked or unmarked vehicle. Johnson is housed in the Elmore County Jail, charged with murder, according to jail records. No bond has been set.

Law enforcement sources and witnesses said Williams approached a truck at the QV and asked the person inside why his music was so loud. That’s when Williams was shot once in the head.

Charles Benson said he witnessed it all.

“Right there at Pump 8,” Benson said, standing in front of the store. “Big John comes up and asks the young man about the loud music, just like he has done hundreds of times before. Big John don’t take no foolishness.

“That’s when he got shot. I don’t understand it. The sheriff is gone over loud music? It just don’t seem right.”

“I just don’t understand it,” Curtis Lee said, filling up Sunday at the QV. “When I heard it last night, I knew it wasn’t anybody from Lowndes County that would do such a thing. It had to be somebody from outside. Nobody in Lowndes County wants to hurt the sheriff. He’s part of the community.”

Across the street and behind the courthouse at the New Salem Christian Church, the Rev. Willie Smith got ready for services.

“It’s praying time,” Smith said. “The sheriff was our sheriff. It’s quite sad. He was a servant to the community, having grown up here and making his work law enforcement. He was spiritual man, a deacon in his church.

“It’s praying time,” says the Rev.Smith. He says Sheriff John Williams “was a servant to the community.”

“When we had revival, the sheriff would lead devotions. He was just a good, good man. I don’t understand it. All I know is God is in control, God is in complete control.”

“We came up as deputies together,” said retired Prattville Police Chief Mark Thompson. “This is just devastating.”

“For his size, he was gentle,” Sedinger said. “He was full of compassion. He loved everybody. You just can’t say enough good things about John.”

Williams was always ready to come to the assistance of other law enforcement agencies, said Elmore County Sheriff Bill Franklin.

“Any time you needed help, John was there,” he said. “He was a friend to everyone.”

“I’m proud to say he was my friend,” Lowndes County District Judge Adrian Johnson said. “He didn’t care if you were black or white, rich or poor. He took care of people. He knew everyone in the county. He always had a smile, he was always ready to serve.

“This is just a tragic end to a fine, fine man,” Johnson said. “I just can’t imagine Lowndes County without John Williams.”

William Chase Johnson, 18, arrived escorted by four state troopers. He is the son of a sheriff’s deputy in neighboring Montgomery County. He was wearing black- and white-striped jail garb and was restrained in handcuffs and ankle chains. He appeared before Crenshaw County Circle Judge Tom Sport.

The entire process took less than five minutes. After Judge Sport told him of the murder charge against him, Johnson said he understood that charge and told the judge that he had not decided whether he was going to hire an attorney or need to have one appointed. Judge Sport set a no bond in the case.

Security was visibly heightened outside of the courthouse and inside in the courtroom itself. Uniformed and plainclothes officers were stationed throughout the courthouse. Several were seen carrying rifles or shotguns. Johnson is being housed in the Elmore County Jail.

His body was being transported from the Alabama Department of Forensic Sciences in Montgomery to Bell Funeral Home in Hayneville.

There was about twenty-four law enforcement vehicles from across the state in the procession to honor ‘Big John’ Williams.

Governor, Kay Ivey, has also ordered flags to be flown at half staff that day.

To our Prestige Family this one hits close to home for us, because we knew Big John. Please continue to keep his family in prayer, as well as the community of Lowndes County.

Frankie Lons, the vibrant mother of singer Keyshia Cole, who became a popular figure after appearing on Keyshia Cole: The Way It Is in 2006, has passed away.

News of her death surfaced on Monday morning (July 19). Cole’s younger sister, Elite, who appeared on The Way It Is as well, confirmed the sad news. She took to her InstaStories to write, “Worse pain ever….to see my mama in a body bag on her birthday! My heart so f–kin broke.”

According to Cole’s brother Sam, said Lons relapsed and overdosed at her home on Sunday while celebrating her birthday.

Last year, Cole shared that Lons, who struggled with drugs off and on, checked into rehab and in February would have been there for 30 days. She was hopeful that her mom would finally be able to stay sober and be as healthy as possible for her children.

“Do you believe in the power of love?” she wrote alongside a photo of her next to her mom.”What about lack thereof? 50/50 There’s strength in knowing there’s something or someone you can always lean back on. Someone to catch u when u fall. I’ve been being strong for you, hoping I’ll get a chance to feel that feeling from you.”

Cole and her older sister, Neffeteria, haven’t spoken publicly on the news. During Cole’s latest reality series on BET, Keyshia Cole My New Life in 2019, the singer and Lons had a conversation about the possibility of her not being around, which Cole said, understandably, alarmed her.

“Some things happen out there in the streets and it scares a child, the thought,” Cole said.

“One day chicken the next day feathers. If I die today you’re going to move on and you’ve got to make it. You’ve got to live for Keyshia,” Lons replied. “You have to live for you and your family not nobody else. You don’t have to do nothin’ but die and pay taxes, but you have to move on if anything happens to me. At the end of the day you’ll see me later. Up there.”

She added, “I’m a be always where you can find me. Even when God calls me. A mother’s love will always protect you.”