Dr. Anthony Fauci said Thursday that states reopening their economies “can’t just leap over things” that would potentially allow the coronavirus to rebound.

In an interview on NBC’s “TODAY” show, Savannah Guthrie asked Fauci whether the states that are beginning to reopen have the capability to do contact tracing and Fauci responded that while he can’t go through a list state by state, he urged states that don’t have that capability to “go very slowly.”

“You can’t just leap over things and get into a situation where you’re really tempting a rebound,” he said. “That’s the thing I get concerned about. I hope they don’t do that.”

Fauci said states should follow federal guidelines and only begin to reopen if they have a two-week decline in the number of new COVID-19 cases. He cautioned that states must have the capability of identifying, isolating and contact tracing people who test positive because “there will be blips — there’s no doubt.”

“When you pull back, there will be cases,” Fauci said.

As for a vaccine to prevent the coronavirus, Fauci confirmed that he has been working on the Trump administration’s “Operation Warp Speed” project that is seeking to move up the timeline of a drug as quickly as possible.

Asked if he thinks developing hundreds of millions of doses of a vaccine is doable by January, Fauci said, “Yeah, I do, Savannah.”

Fauci said that the U.S. is in the early phases of a trial for a vaccine and once researchers move into the next phase, they’re going to go “as quickly as we possibly can” to determine whether it’s safe. If they think that might be the case before that testing phase is completed, Fauci said the U.S. will start preemptively ramping up production of the vaccine in the hopes that it will work.

“I think that is doable if things fall in the right place,” he said about a January timeline. 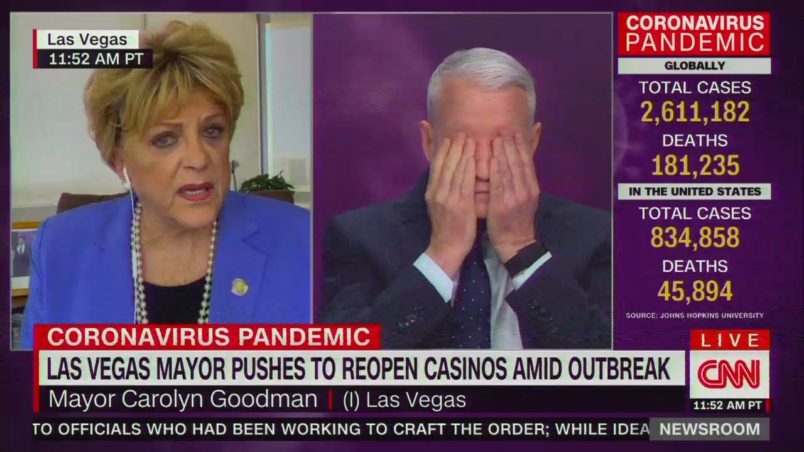 When Carolyn Goodman began her week, the independent mayor of Las Vegas probably didn’t anticipate that in a matter of days...