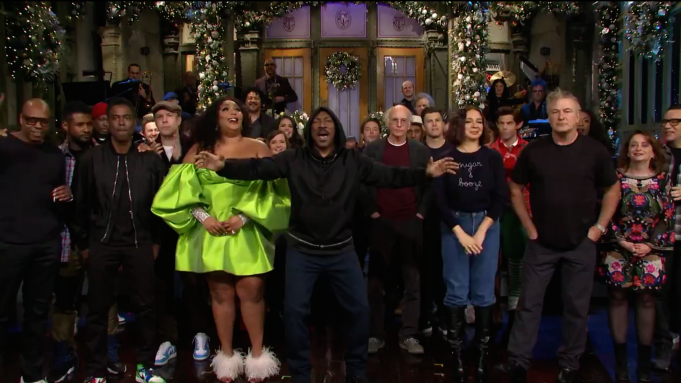 Nielsen Media Research reported that the episode nailed an average 2.5 rating for adults ages 18-49 and brought in 9.921 million viewers, according to CNN.

Murphy, 58, proved he still has it as he brought back beloved sketches and characters, including “Mister Robinson’s Neighborhood,” “Buckwheat,” and “Gumby.” He delivered a stinging cold open where he questioned the likelihood that he would become a stay-at-home dad of 10 children, while Bill Cosby, America’s favorite dad, would wind up in jail.

“If you would have told me 30 years ago that I would be this boring, stay-at-home house dad and Bill Cosby would be in jail, even I would have took that bet,” he quipped before adding in a spot-on impersonation of Cosby: “Who is America’s Dad now?”

Andrew Wyatt, a Cosby representative, took offense to Murphy’s opening monologue and essentially called the whole performance a sellout to his race. “One would think that Mr. Murphy was given his freedom to leave the plantation, so that he could make his own decisions; but he decided to sell himself back to being a Hollywood Slave,” Wyatt said in a statement.

Murphy’s appearance marked the first time the comedian had been back to SNL in 35 years. To top it off, Lizzo was the musical guest, and some of the country’s top comedic performers joined Murphy on stage, including Tracy Morgan, Dave Chappelle, Chris Rock, and cast member, Kenan Thompson.

Prior to Murphy, the last time SNL had the highest rated comedy telecast was in May 2017, when Melissa McCarthy served as host, and HAIM performed as the musical guest.

Wyatt didn’t mention, however, decades ago when the elder comedian would reportedly lecture Murphy about being too raunchy and not setting a good example. Murphy recently told Jerry Seinfeld, in an episode of “Comedians in Cars Getting Coffee” that as a young comedian, Cosby always treated him mean. Many Murphy fans are now calling the comedian’s SNL monologue, as well as other recent comments, payback.

Celebrities Who Started Dating After Years of Friendship: From Shawn and Camila to Kim and Kanye