4TH UPDATE, 12 PM PT: CNN says that it accepts Minnesota Gov. Tim Walz’s apology after reporter Omar Jimenez and a network crew were arrested early Wednesday while covering the George Floyd protests. Watch the video of the arrest above.

A CNN spokesperson said, “We accept Governor Walz’s apology and appreciate the sincerity of his words about the arrest of our crew this morning.  As journalists, the First Amendment gives us not only the right but also the responsibility to shine light in darkness and hold those in power to account.  With that in mind, we will move forward and continue our work in Minneapolis and everywhere else stories need to be told.”

Jimenez and two members of the crew, producer Bill Kirkos and photojournalist Leonel Mendez, were arrested as they were doing a CNN live shot. They were released, but CNN worldwide president Jeff Zucker spoke with Walz to express his concern over what happened.

The Minnesota State Patrol issued a statement that said, “In the course of clearing the streets and restoring order at Lake Street and Snelling Avenue, four people were arrested by State Patrol troopers, including three members of a CNN crew. The three were released once they were confirmed to be members of the media.”

But CNN responded with a statement that said “This is not accurate — our CNN crew identified themselves, on live television, immediately as journalists. We thank Minnesota @GovTimWalz for his swift action this morning to aid in the release of our crew.”

3RD UPDATE, 9:37 AM PT: Minnesota Governor Tim Walz said that he takes “fully responsibility” for the arrest of Omar Jimenez and a CNN crew as they covered protests in Minneapolis over the death of George Floyd.

“I take full responsibility there is absolutely no reason something like this should happen calls were made immediately,” Walz said at a press conference. “This is a very public apology to that team.”

He added, “In a situation like this, even if you’re clearing an area, we have got to ensure that there is a safe spot for journalism to tell the story. The issue here is trust. The community that’s down there, that’s terrorized by this, if they see a reporter being arrested, their assumption is that something’s going to happen that they don’t want to be seen. And so that is that is unacceptable. We will continue to strive to make sure that accessibility is maintained, that not only that, the protection and security and safety of the journalists covering this is a top priority.”

He said that he spoke with CNN president Jeff Zucker soon after the arrests, and Zucker wanted to know what happened.

“I appreciate his understanding in a situation, that he was rightfully incredibly angry, and that falls squarely on me that apology has been issued, and I think going forward to make sure it doesn’t happen again,” Walz said.

Katie Townsend, legal director for the Reporters Committee for the Freedom of the Press, said that CNN may have a claim in this situation, as other journalists have sued government agencies and officials in the past for arrests during protest situations. In an email, she said that the First Amendment prohibits government officials, including police officers from interfering with news gathering or retaliating against journalists for protected speech.

“These claims can be difficult to establish, and there have been cases recently … that suggest that the bar for proving that an arrest violated and individual’s First Amendment rights is high.

“That said, having watched the video here, it doesn’t appear that the police had probable cause for an arrest; the CNN crew responded professionally, identified themselves as journalists, and repeatedly asked where they should stand; they were arrested anyway.”

SAG-AFTRA, which represents broadcast journalists, issued this statement Friday afternoon: “As journalists it is our job to cover protests, demonstrations, marches and rallies — some peaceful, some not. We do this without interfering with protesters or law enforcement. The arrest of Omar Jimenez, who was clearly identified as a credentialed member of the news media, is unacceptable.”

One of Jimenez’s colleagues also covering the protests, Josh Campbell, said that he received the “opposite treatment” from police. He identified himself and his news outlet and was allowed to remain in a designated area, he told CNN’s John Berman.

“Let me just say something — it is a statement of fact. You Josh Campbell are white. Omar Jimenez is not. I do not know if that played into this,” Berman said.

“There was a lot different here than what Omar experienced,” Berman said.

2ND UPDATE, 4:44 AM: CNN reporter Omar Jimenez and his crew have now been released from policy custody after their arrest live on air this morning mid-broadcast from the Minneapolis protests. As per below, state Governor Tim Walz intervened directly in the incident after calling CNN president Jeff Zucker to apologize.

After being released, Jimenez immediately took to the air again to recount the story and update on his situation.

“Everyone was pretty cordial after that [my arrest] happened,” said Jimenez, who added that a police officer told him he was “just following orders”.

“They weren’t violent with me, we were having conversation about how crazy this week has been for every single part of the city. A lot of these people are on edge,” the reporter continued. “The one thing that gave me a little bit of comfort was that it happened on live TV. When you talk within the community about, let’s say what happened with George Floyd, there’s discussion that, what’s happening isn’t new, it’s being filmed. That speaks to the power of having something that happens on camera. You can have people speak up for you without you saying anything.

Twitter has been flooded with condemnation for the incident and praise directed at Jimenez for his professionalism.

UPDATED, 4:28 AM: CNN is now reporting that Minnesota Governor Tim Walz has spoken directly to CNN president Jeff Zucker to take full responsibility for the incident, and is working to have Jimenez and his crew released immediately. “It was totally unacceptable and inadvertent what happened… they clearly had the right to be there, we want the media to cover this [the protests], it is never acceptable for this to happen,” Walz told Zucker, according to CNN’s John Berman.

PREVIOUSLY 3:30 AM: CNN correspondent Omar Jimenez and his camera crew have been arrested during a live broadcast from the Minneapolis protests.

Footage quickly emerged online, and many of Jimenez’s colleagues took to Twitter in outcry.

The incident took place shortly after 6AM EST (3AM PST) during the live filming of CNN’s weekday morning show New Day.

In the footage, Jimenez, sporting a virus protective mask, is being quizzed by his anchors Alisyn Camerota and John Berman in front of a group of riot police as they move to arrest a nearby person. State patrol then approach the presenter and his crew, and Jimenez can be heard telling the officers that the four-strong unit can move “where they would like” to get out of their way in a cooperative and non-confrontational manner. The officers surround the crew as Jimenez continues to report live on air, before he is told that he is under arrest and placed in handcuffs, displaying them to the camera as he is walked away. After a moment, the crew are also placed into handcuffs.

“That is an American television reporter being led away by police officers. He clearly identified himself as a reporter and was respectfully explaining to the police that the CNN team was there and moving away as they would request, and then for some reason he was taken into police custody live on television,” said anchor John Berman off screen.

“I have never seen anything like this,” Berman adds on several occasions. The camera continued to roll after the arrests, sitting on the floor at the feet of the officers.

Fellow CNN Josh Campell, who is white, was also in the area but was not arrested. “I identified myself… they said, ‘OK, you’re permitted to be in the area’… What happened to Omar (Jimenez) was clearly a lot different… I was treated much differently than he (Jimenez) was,” he told the network.

CNN has confirmed the incident and called for the immediate release of its employees. “A CNN reporter and his production team were arrested this morning in Minneapolis for doing their jobs, despite identifying themselves – a clear violation of their First Amendment rights. The authorities in Minnesota, including the Governor, must release the three CNN employees immediately,” a statement from the network read.

Fierce protests have been raging in Minneapolis since an unarmed black man, George Floyd, died in police custody on Monday. Overnight, protesters broke into a police precinct in the city and set it on fire as the violence escalated. Minnesota Gov. Tim Walz has activated the state National Guard in a bid to restore order. Four officers involved in the incident have been fired but have not yet faced charges, with prosecutors stating they are still gathering evidence.

President Donald Trump tweeted earlier on Friday that the military would “assume control” in the city if the disturbances continue, adding “when the looting starts, the shooting starts”. His remarks have provoked a huge blowback and were subsequently flagged by Twitter for violating its rules around “glorifying violence”.

Atlanta mayor to vandalizing protesters: 'This is not a protest ... this is chaos' 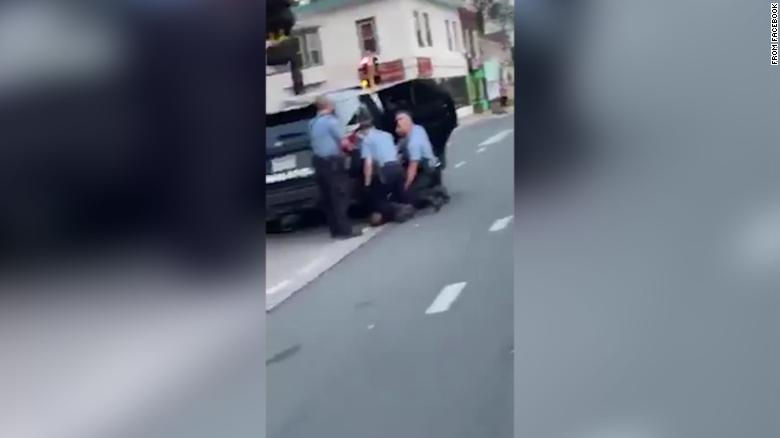