CLEO TV’s signature new series CLEO SPEAKS kicks off with Mahisha Dellinger, founder of the natural hair care line CURLS Beauty Brands, and Dana Chanel, creator of the largest online ministry Sprinkle of Jesus.  Mahisha and Dana share their unique perspectives on issues facing Millennial and Gen X women of color today, and reveal their emotional journeys that have shaped their careers and influenced their success. They also sound off on a variety of topics, including motherhood, fashion, relationships, wellness, politics, arts, social justice, business and more. She speaks. We listen.

CLEO SPEAKS is a candid new series that gives dynamic women a platform to share their truths with the world. Selected for their impact on the world, true modern leaders, from CEOs and activists to entrepreneurs, share their candor.  In intimate settings, they reveal the personal and emotional journeys that have shaped their careers and influenced their success. She speaks. We listen. Featured series participants include Tamika Mallory, Activist; April Reign, Activist/Creator #OscarsSoWhite; Tracy Garraud, Co-Host, Sway in The Morning and Founder, She’s Beauty and The Beast; Alicia Garza, Activist/Co-Founder, Black Lives Matter and more.

CLEO SPEAKS is produced by Ruby Red Inc., with Gina Holland and Martine Charles serving as Executive Producers.  For CLEO TV, Jason Ryan is Executive Producer in Charge of Production; Donyell McCullough is Sr. Director of Talent & Casting; and Robyn Greene Arrington is Vice President of Original Programming and Production.

Rapper/Activist David Banner and comedian Glory Mora stop by Chef JJ’s kitchen for good laughs and a savory meal on this week’s episode.   Chef JJ and his guests bring the heat while preparing an Italian Classic – Crispy Chicken Parmesan covered in Tomato Sauce over Fresh Fettuccine and Salad with Dijon Vinaigrette.

Jackson, MS native David Banner is a Grammy Award-Winning music producer, recording artist, philanthropist, activist and actor whose film credits include “Lee Daniel’s The Butler” and Ride Along.” Glory Mora is a comedian and Harlem native who recently launched her own production company to provide opportunities for up-and-coming African American and Latino women comedians.  The group dishes on everything from the influences of different cultures on food, the African Diaspora to positive music and creating opportunities for the next generation.  Don’t miss the next episode of JUST EATS WITH CHEF JJ.

JUST EATS WITH CHEF JJ is produced by Powerhouse Productions, with Rochelle Brown and Sonia Armstead serving as Executive Producers.  For CLEO TV, Tia A. Smith and Jason Ryan are Executive Producers in Charge of Production; Donyell McCullough is Sr. Director of Talent & Casting, and Robyn Greene Arrington is Vice President of Original Programming and Production.

CLICK THE IMAGES TO VIEW THE RECIPES, BEHIND THE SCENES, CLIPS AND MORE FOR 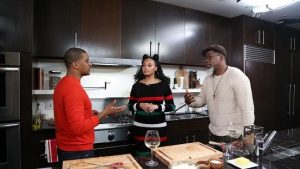 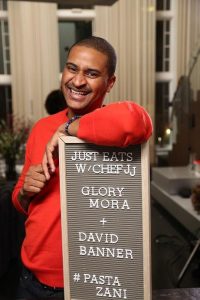 Words of inspiration from David Banner |

For more information about CLEO TV visit www.mycleo.tv and check out CLEO TV YouTube Channel. Viewers can also join the conversation by connecting via social media on Twitter,Instagram and Facebook (@mycleotv) using #JustEatsWithChefJJ and #CleoSpeaks. 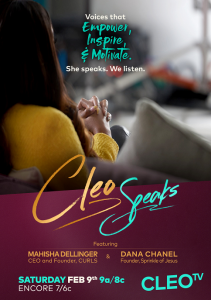 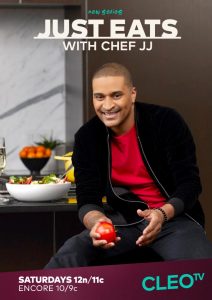