The Boston Marathon came to a halt after two explosions were reported near the race’s finish line. Preliminary reports say at least two are dead and dozens are injured. President Obama made a statement Monday evening.

BOSTON — Two bombs exploded in the packed streets near the finish line of the Boston Marathon on Monday, killing two people and injuring dozens in a terrifying scene of shattered glass, bloodstained pavement and severed limbs, authorities said.

CNN is reporting that at least 10 amputations have been carried out as a result of the attach, and that the bombs were likely designed to propel shrapnel. The Associated Press said that hospitals are reporting at least 134 injured, and at least 15 of them critically.

In Boston.com breaking news, the news site reports that authorities are questioning a person of interest with regard to the bombings at Brigham and Women’s Hospital.

A law enforcement official has confirmed that one of the two victims killed today was eight years old, various media are reporting. The FBI and the White House are deeming this a terrorist attack, although it is unsure if it is domestic or international.

In a national address Monday evening, President Obama said, “We still do not know who did this or why. But make no mistake, we will get to the bottom of this. Any responsible individuals, any responsible groups will feel the full weight of justice.”

The president did not stay for reporters’ questions, and focused on the help given to the victims and their families in his speech. “The American people will say a prayer for Boston tonight,” he said.

An hour after the 2:50 p.m. EDT blasts in Boston’s Copley Square marred the usually joyous end to the marathon, a fire erupted at the John F. Kennedy Presidential Library three miles away, but no one was injured, police said.

In a news conference, Boston Police Commissioner Ed Davis confirmed the explosions and provided security measures for Boston citizens. “Don’t go any place and congregate in large crowds,” Davis said.  Davis also said the incident is an ongoing event and said it is unclear if the “incendiary” occurrence at the JFK library is related to the two explosions at the finish line. Both Davis and Boston Gov. Deval Patrick expressed the necessity for tips and information from witnesses. The Boston Bombs Tipline can be reached at 800-494-TIPS, and to locate victims, the public can call 617-635-4500.

A law enforcement official said cellphone service has been shut down in the Boston area to prevent any potential remote detonations of explosives. But officials with Verizon Wireless and Sprint Nextel said there had been no such requests.

Boston Marathon explosions were reported near the finish line of the Boston Marathon on Monday. Two high-level U.S. law enforcement sources said one or more bombs was responsible for the explosions. An intelligence official said that two more explosive devices have been found and are being dismantled near the scene.

The explosions occurred as thousands of runners finished the 117th running of the Boston Marathon, with crowds watching and cheering at the finish line, with the clock reading at just over four hours. The New York Police Department stepped up security around landmarks in Manhattan, including near prominent hotels, said Paul Browne, deputy commissioner of the NYPD.

Competitors and race volunteers were crying as they fled the chaos. Bloody spectators were being carried to the medical tent that had been set up to care for fatigued runners.  “There are a lot of people down,” said one man, whose bib No. 17528 identified him as Frank Deruyter of North Carolina. He was not injured, but marathon workers were carrying one woman, who did not appear to be a runner, to the medical area as blood gushed from her leg. A Boston police officer was wheeled from the course with a leg injury that was bleeding.

About three hours after the winners crossed the line, there was a loud explosion on the north side of Boylston Street, just before the photo bridge that marks the finish line. Another explosion could be heard a few seconds later. Smoke rose from the blasts, fluttering through the national flags lining the route of the world’s oldest and most prestigious marathon. TV helicopter footage showed blood staining the pavement in the popular shopping and tourist area known as the Back Bay.

“There are people who are really, really bloody,” said Laura McLean, a runner from Toronto, who was in the medical tent being treated for dehydration when she was pulled out to make room for victims of the explosions. “They were pulling them into the medical tent.”  Cherie Falgoust was waiting for her husband, who was running the race. “I was expecting my husband any minute,” she said. “I don’t know what this building is … it just blew. Just a big bomb, a loud boom, and then glass everywhere. Something hit my head. I don’t know what it was. I just ducked.”

Runners who had not finished the race were diverted straight down Commonwealth Avenue and into a family meeting area, according to an emergency plan that had been in place.

Mike Mitchell of Vancouver, Canada, a runner who had finished the race, said he was looking back at the finish line and saw a “massive explosion.”  Smoke rose 50 feet in the air, Mitchell said. People began running and screaming after hearing the noise, Mitchell said.

“Everybody freaked out,” Mitchell said.

The Secret Service expanded its security perimeter at the White House on Monday following the explosions at the Boston Marathon. Secret Service spokesman Ed Donovan said the measure was taken “out of an abundance of caution” and noted that it was not unusual to expand or contract the security perimeters. President Barack Obama was briefed on the explosions by FBI Director Robert Mueller and Homeland Security Secretary Janet Napolitano. The White House said the president also spoke with Massachusetts Gov. Deval Patrick and Boston Mayor Tom Menino and pledged to provide whatever federal support was needed in responding to the incident.

Vice President Joe Biden was on a conference call with gun control activists when staffers turned on televisions in his office Monday to view coverage of the explosions. He said during the call that his prayers were with those in Boston.

The Secret Service, as part of its expanded security near the White House, shut down Pennsylvania Avenue, cordoning off the area with yellow police tape. Several Secret Service patrol cars also blocked off the entry points to the road.

The White House was not on lockdown and tourists and other onlookers were still able to be in the park across the street from the executive mansion.

As runners crossed the finish line at the Boston Marathon, an explosion rocketed through the streets. According to MyFoxBoston, the explosion caused multiple injuries to 23 people, including a policeman, and killed two people. The explosion happened after more than four hours after the first of the race’s with over 25,000 runners competing.

According to multiple reports and accounts for witnesses, there were in fact two explosions though the police has reported one. The BPD released a statement saying, “There was an explosion. Police, fire and EMS are on the scene, we have no indication of how many people are injured.”

The video from SkyFox showed blood on the ground near the finish line. Witnesses reported seeing a victims with lost limbs.  John Ross told the Boston Herald, “Somebody’s leg flew by my head. I gave my belt to stop the blood.”

According to multiple reports, one of the explosions possible went off inside a building near the finish line. After the explosion, ambulances and emergency officials immediately tended to victims as many ran from the wreckage.

It is unknown at the time as to the cause of both explosion. 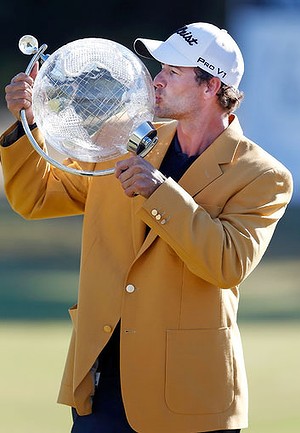 AUGUSTA, Ga. -- Adam Scott became the first Australian to win the Masters, beating Angel Cabrera on the second hole of a playoff...