Luis Alvarez, a retired NYPD bomb squad detective who described for Congress his medical issues during an impassioned appeal for an extension of the September 11th Victim Compensation Fund, died Saturday in a hospice in New York. He was 53.

His death from complications of cancer linked to the time he spent with other first responders in the rubble at ground zero was announced in a Facebook statement from his family. 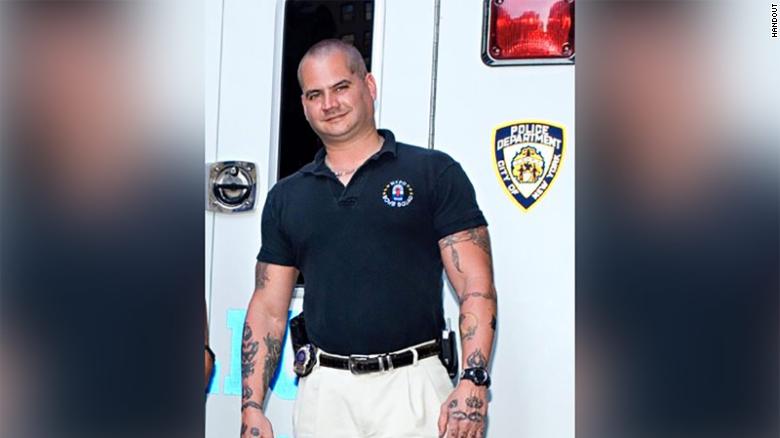 Luis Alvarez
“We told him at the end that he had won this battle by the many lives he had touched by sharing his three year battle,” the statement said.
“He was at peace with that, surrounded by family. Thank you for giving us this time we have had with him, it was a blessing.”
Alvarez entered end-of-life hospice care last week.

Alvarez vowed to fight for benefits until the end

On June 11, a frail Alvarez made his way to Washington with other first responders to testify in a House Judiciary subcommittee hearing for an extension of the fund for police officers, firefighters and other emergency workers who became ill after laboring at the site of the 2001 World Trade Center terrorist attacks. He received a standing ovation that day.
“I’m now in hospice, because (there) is nothing else the doctors can do to fight the cancer,” Alvarez wrote in a Facebook post the following week. “Still here, still breathing, Still fighting.”
NYPD Commissioner James O’Neill tweeted a photo of Alvarez on Saturday with the message: “Our NYPD family & all 1st responders mourn as we remember retired NYPD Bomb Squad Det. Luis Alvarez, who passed this morning.
His strength — physical, mental & emotional — led us all, & we vow to #NeverForget him or his legacy — which was, simply, to have others do what’s right.”
Retired NYPD Det. Luis Alvarez, 53, an American hero suffering from 9/11-related cancer, is now in hospice care. “You all said you would never forget,” he told an MIA Congress last week. “It is my goal & it is my legacy to see that you do the right thing.” 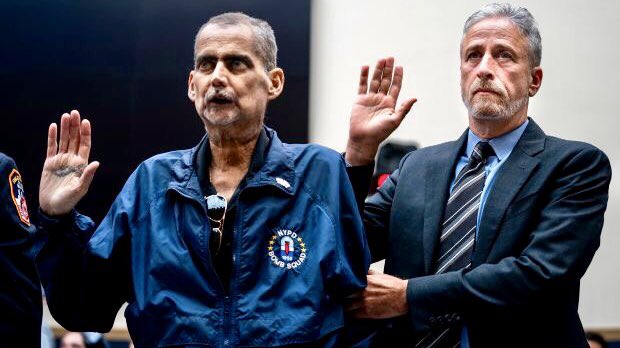 Our NYPD family & all 1st responders mourn as we remember retired NYPD Bomb Squad Det. Luis Alvarez, who passed this morning. His strength — physical, mental & emotional — led us all, & we vow to #NeverForget him or his legacy — which was, simply, to have others do what’s right. 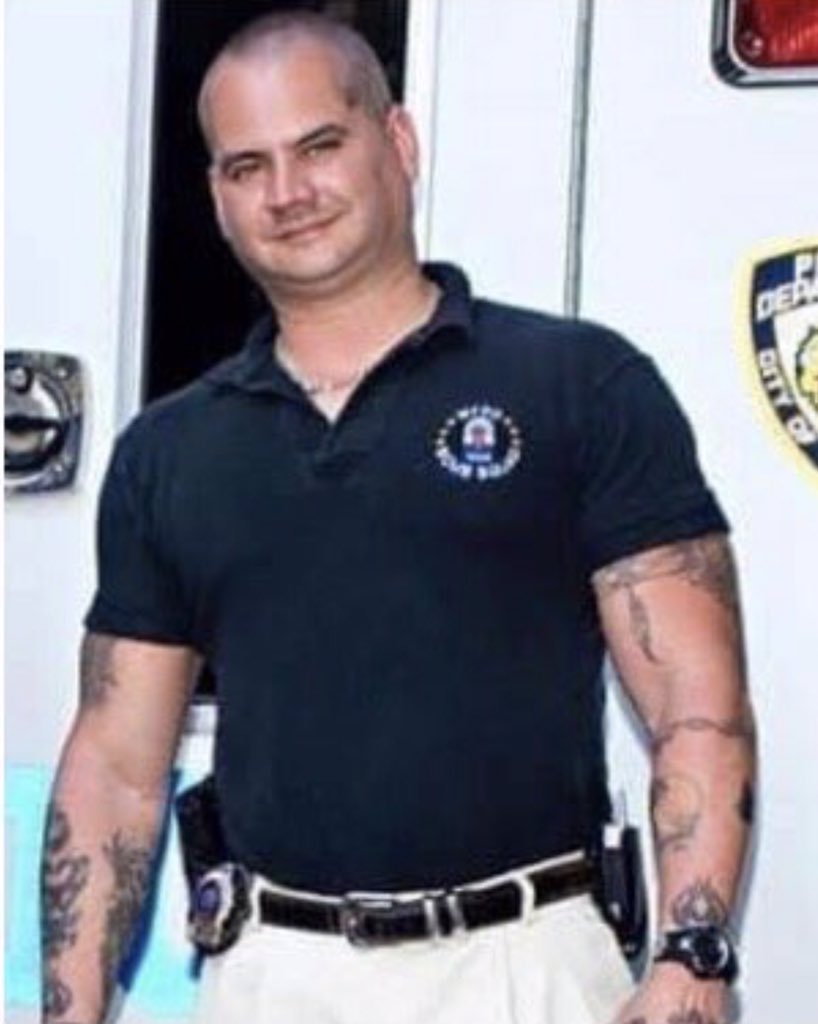 Chief of Detectives Dermot Shea said of Alvarez: “He exemplified the NYPD motto, “Fidelis Ad Mortem” or “Faithful Unto Death.” Detective Lou Alvarez has lost his battle with 9/11-related cancer. An inspiration, a warrior, a friend—we will carry his sword.”
House Judiciary Chairman Jerrold Nadler, D-New York, said via Twitter, “Det. Alvarez lost his fight against cancer, but his fight for 9/11 responders and survivors continues. He dedicated his life to protecting others and advocating on behalf of those ailing after the attacks. It is time for Congress to honor his sacrifice.”
John Feal, a 9/11 first responders and advocate, said that on Tuesday he gave Senate Majority Leader Mitch McConnell Alvarez’s badges a symbol of the importance of the victim compensation fund.
“That was Luis’ intention,” Feal told CNN this week. “Luis wanted Mitch McConnell to have his badge. And let me tell you something, for a New York City police officer to give up his badge, that’s like somebody donating an organ, and Luis wanted the Senate majority leader to understand the importance of this and to be reminded that people are sick and dying.”
Feal told reporters the Senate majority leader committed to holding a vote to extend the fund after sitting down with him and other 9/11 first responders on Capitol Hill.

‘I did not want to be anywhere else but ground zero’

Alvarez wrote last week that the decline in his health had nothing to do with the trip to Washington. But organizers said the trip is a struggle for ailing first responders like the former detective.
Some lawmakers on the panel did not show up for the hearing this month, leading to a fiery speech from comedian and fund proponent Jon Stewart.”As I sit here today, I can’t help but think what an incredible metaphor this room is for the entire process that getting health care and benefits for 9/11 first responders has come to,” Stewart said.
Alvarez, speaking slowly, told law-makers in the room that he planned to get his 69th round of chemotherapy the next day.
“You made me come down here the day before my 69th round of chemo, and I’m going to make sure that you never forget to take care of the 9/11 responders,” he said.
Alvarez said the police officers, fire fighters, paramedics and others at ground zero were doing what they do every day — helping others.
“We were there together with one mission, and we left after completing that mission,” he said. “I have been to many places in this world and done many things, but I can tell you that I did not want to be anywhere else but ground zero when I was there.”
He added, “Now that the 9/11 illnesses have taken many of us, we are all worried about our children and spouses and our families if we are not here.”
Last week, Alvarez posted on Facebook that a nurse noticed he was disoriented when he went for chemo treatment. Tests then revealed that his liver had completely shut down because of his tumors, he said.
“So now I’m resting and I’m at peace. I will continue to fight until the Good Lord decides it’s time,” he wrote. “I will try to do a few more interviews to keep a light on our fight for the VCF benefits we all justly deserve. Please take care of yourselves and each other.”
Alvarez was born in Havana, Cuba in October 1965. He was married to Alaine Parker Alvarez, and has three sons. Hegraduated in 1983 from Monsignor McClancy Memorial High School in Queens, New York. He later studied at the City University of New York.
He was appointed to the NYPD in 1990 and retired as a detective in October 2010.
Alvarez is also survived by his parents, Aida and Felipe; his sister, Aida Lugo; and his brothers, Philip and Fernando.

More than 12,500 cases of cancer diagnosed

The fund Alvarez and others fought for was created in the months following the 2001 attacks and was initially active for two years, paying more than $7 billion relating to injuries and deaths caused by the 9/11 attacks.
But first responders who spent weeks at the site breathing in noxious air clouded with debris from the collapsed buildings — after New York and federal officials told them it was safe — have since been diagnosed with a variety of debilitating illnesses and cancers. 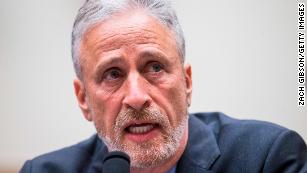 Congress and President Barack Obama agreed in 2010 to pay their medical costs, reopened the fund and set aside $2.7 billion to pay victims just learning about chronic health problems resulting from their work in 2001. In 2012, the government determined that cancers can be compensated as part of the fund.

It wasn’t nearly enough money, however, and in 2015 Congress added $4.6 billion in funding, along with new controls and limits on some payments. The special master who administers the fund anticipates that total payouts for claims filed before the measure expires in 2020 could be far higher: $11.6 billion, if a current uptick in claims — largely caused by an increase in serious illnesses and deaths — continues.
The current proposal to permanently extend the fund would authorize it through 2089. It has plenty of support in the House, where it passed the Judiciary Committee, and Sen. Mitch McConnell indicated that Congress would address the fund.
As of May, more than 12,500 cases of cancer had also been diagnosed, according to The World Trade Center Health Program, a separate health care program related to the victim fund run by the Centers for Disease Control and Prevention.
The most diagnosed ailments are upper and lower respiratory issues like asthma, gastrointestinal problems like reflux, musculoskeletal disorders and mental health conditions.