A driver plowed a pickup truck down a crowded bike path along the Hudson River in Manhattan on Tuesday, killing eight people and injuring 11 before being shot by a police officer in what officials are calling the deadliest terrorist attack on New York City since Sept. 11, 2001.

The rampage ended when the motorist — whom the police identified as Sayfullo Saipov, 29 — smashed into a school bus, jumped out of his truck and ran up and down the highway waving a pellet gun and paintball gun and shouting “Allahu akbar,” Arabic for “God is great,” before he was shot in the abdomen by the officer. He remained in critical condition on Tuesday evening.

Mayor Bill de Blasio declared the rampage a terrorist attack and federal law enforcement authorities were leading the investigation. Investigators discovered handwritten notes in Arabic near the truck that indicated allegiance to the Islamic State, two law enforcement officials said. But investigators had not uncovered evidence of any direct or enabling ties between Mr. Saipov and ISIS and were treating the episode as a case of an “inspired” attacker, two counterterrorism officials said. Mr. de Blasio said at a news conference, “Based on information we have at this moment, this was an act of terror, and a particularly cowardly act of terror aimed at innocent civilians.”

Five of the people killed were Argentine tourists who traveled to New York for a 30-year high school reunion celebration, said a senior official in Santa Fe Province, where they were from. The Argentine authorities said they were Hernán Mendoza, Diego Angelini, Alejandro Pagnucco, Ariel Erlij and Hernán Ferruchi. Martín Ludovico Marro, a sixth member of the group, was wounded. Belgian officials said one of those killed and three of the injured were from Belgium.

Mr. Saipov came to the United States from Uzbekistan in 2010, and had a green card that allowed permanent legal residence. He had apparently lived in Paterson, N.J., and as well reportedly in Tampa, Fla. An official said he rented the truck from a Home Depot in New Jersey. The truck came crashing to a stop near the corner of Chambers and West Streets by Stuyvesant High School. Sirus Minovi, 14, a freshman there who was hanging out with friends, said people scattered. “We heard people screaming, ‘gun’ ‘shooter’ and ‘run away,’” Mr. Minovi said. “We thought it was a Halloween prank.” He realized it was not a joke when he saw the man staggering through the intersection, waving guns and screaming words he could not make out. A passer-by approached the attacker, apparently trying to calm him, Mr. Minovi said, until the man realized the attacker had a gun. The man “put his hands up and was backing away,” Mr. Minovi said.

Almost immediately, as investigators began to look into Mr. Saipov’s history, it became clear that he had been on the radar of federal authorities. Three officials said he had come to the federal authorities’ attention as a result of an unrelated investigation, but it was not clear whether that was because he was a friend, an associate or a family member of someone under scrutiny or because he himself had been the focus of an investigation.

Over the last two years, a terrorism investigation by the F.B.I., the Department of Homeland Security, the New York Police Department and federal prosecutors in Brooklyn resulted in charges against five men from Uzbekistan and one from Kazakhstan of providing material support to ISIS. Several of the men have pleaded guilty. It is unclear whether Mr. Saipov was connected with that investigation. Martin Feely, a spokesman for the New York F.B.I. office, declined to comment on whether Mr. Saipov was known to the bureau. F.B.I. agents were expected to search Mr. Saipov’s home in Paterson, N.J., and his car on Tuesday night, a law enforcement official said. A phone, which was recovered at the scene of the attack, also would be searched, another official said.

The attack unfolded as nearby schools were letting out on a Halloween afternoon. It ended five blocks north of the World Trade Center. The driver left a roughly mile-long crime scene: a tree-lined bike path strewn with bodies, mangled bicycles and bicycle parts, from wheels twisted like pretzels to a dislodged seat.

Mr. Saipov, a slim, bearded man, was seen in videos running through traffic after the attack with a paintball gun in one hand and a pellet gun in the other. Six people died at the scene and two others died at a hospital, officials said. The authorities credited the officer who shot him with saving lives. “He was Johnny-on-the-spot and he takes the guy down,” a city official said. Coming five months after a car rammed into pedestrians in Times Square, killing one, Tuesday’s attack again highlighted the danger of a vehicle attack on busy city streets. The Times Square attack was not an act of terrorism. But both events brought to mind the terrorist attack last year in Nice, France, in which a cargo truck killed scores of people celebrating Bastille Day. The episodes also evoked calls from terrorist magazines, including in an edition of Rumiyah, a magazine used by ISIS, for attackers to mow down pedestrians with trucks, continue the attacks with a knife or a gun and claim responsibility by shouting or leaving leaflets. Students in Halloween costumes streamed out of nearby schools after lockdowns were lifted and huddled with parents. Their faces, once painted for the holiday, were streaked with tears.

Emily, 12, a seventh-grader at I.S. 289 whose father asked that her last name not be used, had been walking on her usual route home when other students turned and ran in the other direction. “All the kids were screaming, ‘Run!’, ‘Gun!’ ‘Run inside,’” she said, still wearing cat ears. She said mothers pushing strollers and children in costumes ran in a herd back toward the school.

President Trump responded to the attack on Twitter: “In NYC, looks like another attack by a very sick and deranged person. Law enforcement is following this closely. NOT IN THE U.S.A.!”

Gov. Andrew M. Cuomo cautioned at a news conference, “There’s no evidence that suggests a wider plot or a wider scheme.” In the aftermath, city and state law enforcement agencies increased security at high-profile locations. Terrorism analysts noted that on Monday a French pro-ISIS media unit, known as the Centre Mediatique An-Nur, put out a specific threat for Halloween, mentioning the date on a banner spread on the encrypted app Telegram and on ISIS-affiliated Twitter accounts.

Mr. Saipov wove a deadly path on a stretch usually bustling with commuters, runners and cyclists, drawn by the downtown offices nearby or the shimmering river. He turned onto the bike path alongside the West Side Highway at Houston Street just after 3 p.m. and sped south, striking numerous pedestrians and cyclists, many of them in the back, the authorities said. People scattered and dived to the asphalt.

The truck, labeled with a sign saying, “Rent me starting at $19,” rammed into the bus near Chambers Street. The bus serves two schools in Lower Manhattan and transports students with special needs. Two adults and two children on the bus were injured, the authorities said. 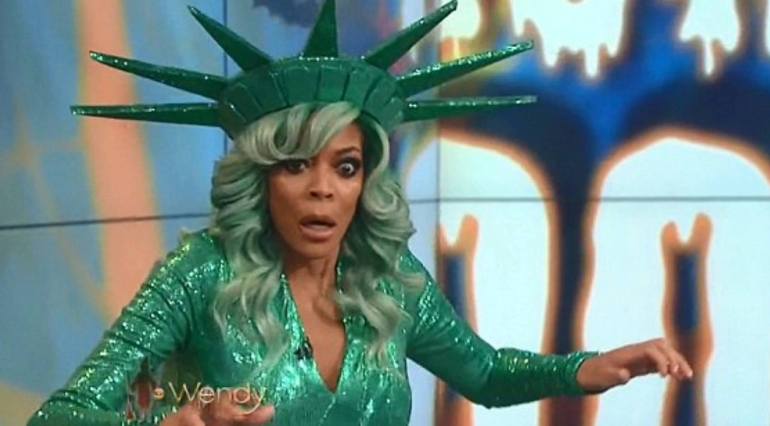 Wendy Williams collapses during Tuesday’s live airing of The Wendy Williams Show. The talk-show host, who was dressed as the Statue...